Contrary to popular belief spousal support and alimony are alive and well in Nevada.

Spousal support is financial support given by one spouse to the other while the parties are still married,  before a divorce, usually as part of a separate maintenance action (a.ka. legal separation).

Alimony is financial support given by one spouse to the other spouse after a divorce. Alimony payments are deductible to the payor and considered income to the payee by the IRS.

Alimony is separate from any property settlement. Since women have entered the workforce, alimony isn’t granted to them as often as it was in the past when a large number of women were stay-at-home moms or homemakers.

But, again, each situation is different. Even if a woman is employed, she might be entitled to some alimony for a period of time if her income is well below that of her spouse, or if she needs to study to get a degree or training of some sort to be able to support herself. This can go both ways. If Wife has been making considerably more money than Husband, she might have to pay him spousal support, or alimony.

If the marriage was short-term, but a spouse will suffer unduly because of a big difference in income between the parties, a judge might well grant short-term alimony to allow that spouse time to figure out how to increase his or her income.

WHEN DOES A JUDGE CONSIDER GRANTING ALIMONY?

Other considerations under NRS 125.150 (Nevada law on alimony) include:

Note that Nevada is a “no fault” state,  so bad acts (such as cheating on a spouse) that do not cause economic harm or “community waste” are not grounds for temporary spousal support or alimony. If you need support right away when you file for divorce, you can file a motion with Family Court for temporary spousal support. This will get you a hearing in front of the judge sooner.

In Nevada, a judge has a lot of discretion in deciding whether to grant alimony or not, as well as how much and for how long:

You can read a summary of the statutes here.

If you prefer, you can read the entire divorce statutes, NRS Chapter 125,  on the Nevada Statutes website

WHEN DOES ALIMONY CEASE?

By law (in Nevada), alimony stops when the spouse receiving alimony either passes away or remarries.

You can modify alimony if there is an increase or decrease of 20% of more in the paying party’s income.  This is considered a change of circumstances. However, the Court will look to see if the payor is under-employing or un-employing himself to avoid paying an amount he or she does not wish to pay. A motion for change must be made in good faith, such as a lack of employment opportunities or a change in health making it impossible to continue paying the same amount due to loss of income because of it.  A request to modify alimony must be made in good faith.

Parties also have the option to stipulate to non-modifiable alimony which would preclude a modification motion. An option to monthly alimony payments is a lump sum non-modifiable alimony.  In fact, with much older couples the Court will often consider lump sum alimony instead of periodic payments simply to avoid the payee becoming suddenly destitute because of the untimely death of the payor.

Ready to file your divorce, or have questions about filing? We’re here

The Who Pays and How Much of Spousal Support and Alimony 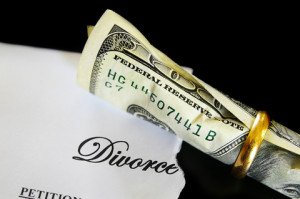 You live in Nevada, and you’re about to get a divorce. You’ve been married a few years and your spouse earns somewhat less than you, or stayed at home to raise your children or because you didn’t need two incomes.

In Nevada, the statutes list only things a judge will take under consideration when deciding whether or not to grant spousal support or alimony. There is no actual, “set in stone” table to follow based on income like we find for child support.

Below is a partial list of things the judge will look at when deciding whether or not to grant support or alimony. Each and every situation is different, so some of these may or may not matter, and other things in addition, or instead of, these might come into play:

In some cases, in lieu of, or in addition to, the Nevada court might grant alimony or support  to a spouse for the purpose of obtaining training or education in order to attain new employment, or better employment.

Should alimony be granted for the purposes of education or training, more often than not, the judge will also order that the spouse getting the alimony start the training within a specified amount of time after the granting of the alimony. And more often than not, there is a reasonable time limit placed on it, usually for the length of time it takes the spouse to train or retrain.